How Does CBD oil Work in Our Body?

The last few years CBD oil seems to have gained status as one of the “Wonders of the World”. The list of ailments it can alleviate is long and substantial, but many people question how one little plant can help so many things in one go? How does CBD oil work in our body? A few little drops can help you sleep better, lower your blood pressure, fight inflammation and you can share it with your pet?? Is that really true? We are often told that if it sound too good to be true… then it is probably a fluke! But with CBD oil it is TRUE – here we explain how CBD creates homeostasis.

CBD is the abbreviation for ‘cannabidiol’ and is found in cannabis/hemp plants, and there are 113 currently known cannabinoids, each playing a role in the endocannabinoid system. Tetrahydrocannabinol (THC) and cannabigerol (CBG) are two other well-known types of cannabinoids. CBD is a non-psychoactive compound, which means that people do not feel ‘high’ after using it.

Homeostasis is the tendency to resist change in order to maintain a stable, relatively constant internal environment. We often think of this as our bodys internal temperature at a normal 37 degrees celcius.

The body maintains homeostasis in many places in addition to temperature. For instance, the concentration of various ions in your blood, must be kept steady, along with pH and the concentration of glucose. If these values get too high or low, you can end up getting very sick.
Homeostasis is maintained at many levels, not just the level of the whole body as it is for temperature. For instance, the stomach maintains a pH that’s different from that of surrounding organs, and each individual cell maintains ion concentrations different from those of the surrounding fluid.
Maintaining homeostasis at each level is key to maintaining the body’s overall function and your health.
Homeostasis have an impact on the following bodily functions: 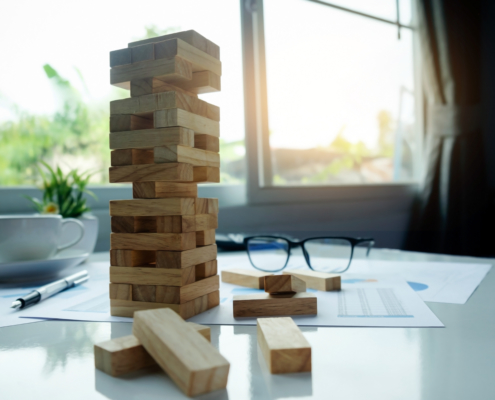 We all know that if any of the above are not working properly we will feel it immediately. Many of these functions are interlinked and can impact eachother, ex. if we don’t sleep well our stress level rises which can raise our heart rate. Longterm this can have a huge effect on our general health and we end up taking medication for a long list of them.

How does CBD oil create homeostasis?

The endocannabinoid system works to maintain homeostasis by using cannabinoid receptors to monitor reactions in the body. When a discrepancy is detected, cannabinoids are synthesized to interact with our bodys receptors (CB1 & CB2). Then they stimulate a chemical response to address the issue.

The difference between cannabinoid receptors and other receptors in the body, is that they encourage two-way communication. This means that cannabinoid molecules can exchange information to achieve the desired result and balance. The introduction of CBD oil into this system can increase the effectiveness of the endocannabinoid system. Our body’s ability to remain in balance and achieve optimal health is then enhanced.

So even if you do not have an underlaying condition, it can only benefit you long term to take CBD oil to keep that balance and prevent the “normal” lifestyle ilnesses many people get, once the are in their last part of their lives.

What is the Endocannabinoid System?

The endocannabinoid system is a network of endocannabinoids and cannabinoid receptors that exist throughout our bodies. It is thought to exist in pretty much all mammals, and it is absolutely crucial to our survival.

The cannabinoid receptors exist on the surface of cells and “listen” to what’s going on in the body. They communicate this information about our bodies’ status and changing circumstances to the inside of the cell, allowing for the appropriate measures to be taken. In other words, they allow for us to maintain homeostasis by monitoring what is going on in our bodies. 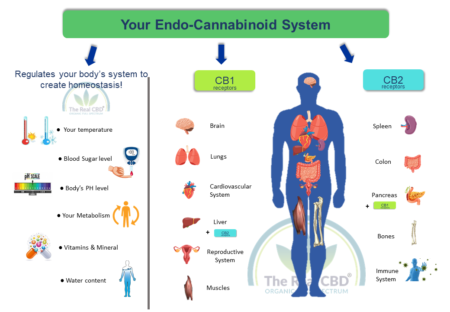 Most of us have by now heard of the cannabinoids found in plants, called phytocannabinoids, but the body also produces its own, which are referred to as endocannabinoids. These molecules are created whenever we need them, usually in response to some change in the body. They can bind directly with the cannabinoid receptors – you can think of them as slotting into one another like a jigsaw puzzle or a lock and key. This process is what separates endocannabinoids from other molecular signals like hormones or neurotransmitters, which can be stored in the body.

Which CBD oil should you choose?

Now we have covered how CBD oil works in our body, and you may have decided to start taking it daily and gone on google or to a healthshop to find some for yourself. You will find the first 10 diffrent brands which all promise your they are the best – so which one do you choose? And how do you find out which strength to get? Is there anyone you can talk to about this?

We answer all your common questions in our new free E-book available to download onto your ipad, computer or mobile phone. Just click on the link below and follow the instructions.

As for which CBD oil strength to get, head over to our Ultimate CBD Product Guide and find out.

How CBD Oil Impacts the Body (is CBD the health solution you’re missing...
Scroll to top